Last Sunday there was a contest of  living statues or živé sochy, as it is said in Czech language, in the main square , known as Náměstí Svobody, in the city of Brno.
When I was informed about this event I asked my self, uhm... now how I do I take it? The options I had were:
A) Go and snap the "statues" in a journalistic style. Try to catch how the people interact with them, uhm....  no.
B) Simply portrait them in full body with the buildings, people, etc as a background and in post production change the colors to give them a "sculpture look". Uhmn.. no either, It would had not worked because a good photo of that kind depends on factors I cannot control as the background (it could be ugly or do not match  the statue look), people waking around, etc plus the idea that it would look very similar to many other photographs out there with the same subject.
C) Last one, take a reflector or diffuser, place it behind the subject, as a background, to isolate it from the context and make the photo so I can have just the statue and nothing else to distract.

I liked the last one the most, however it would not be so easy. I did not have anybody to help me to hold the reflector behind the model so I would had to do it. How? carrying with me a tripod or stand like this. Uhm...backpack with camera equipment at my back plus a bag with a tripod and a reflector on the hand, heavy package... no other option, when you really want to do something, you do it.

So I went for it. The square was crowed because there was too a marathon competition. The statues were quite close to each other by a stage where there was a show and me trying to walk between the people to reach the statues. I think I must had been a kind of show, someone just appearing between the people setting a tripod with a reflector, pick a "big" camera with a "big" (my 70-200mm) lens, move around and start to shoot a person pretending be statue.

Everything was going fine until I realized there was another photographer, pretty, by the way, and  I think was a serious hobbyist for the kind of lens she had that was taking taking "advantage" of my setup and making her own photos, I don't mind if someone just snap some shoots but she was doing it with every statue where I set the reflector! so where is her creativity I tough, I mean  if  in any kind of art the goal is to try to be original or come out with something unusual why "steal", I don't mean I am the first with this idea but in that context was my effort to carry and set-up all by self. At the end I did not say anything, being a street show actually give to everyone the freedom to take photos whenever and however of what they want. The good part is that, her action lead me to change my original idea. If at the beginning I had tough with the reflector make a frame inside the photo to isolate it from the environment I decided to avoid it completely simply  extending the reflector edges with the magic of Photoshop.

A virgin or saint? 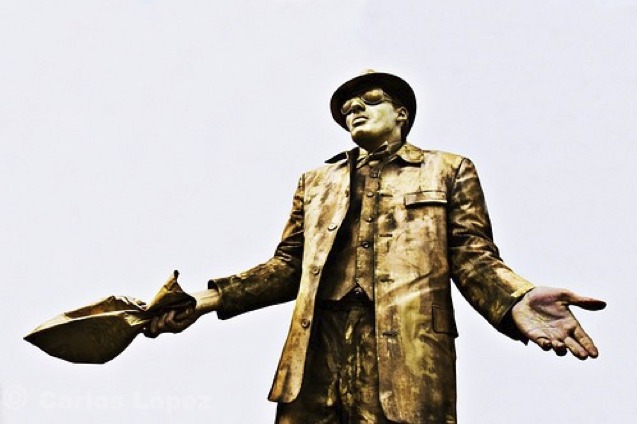